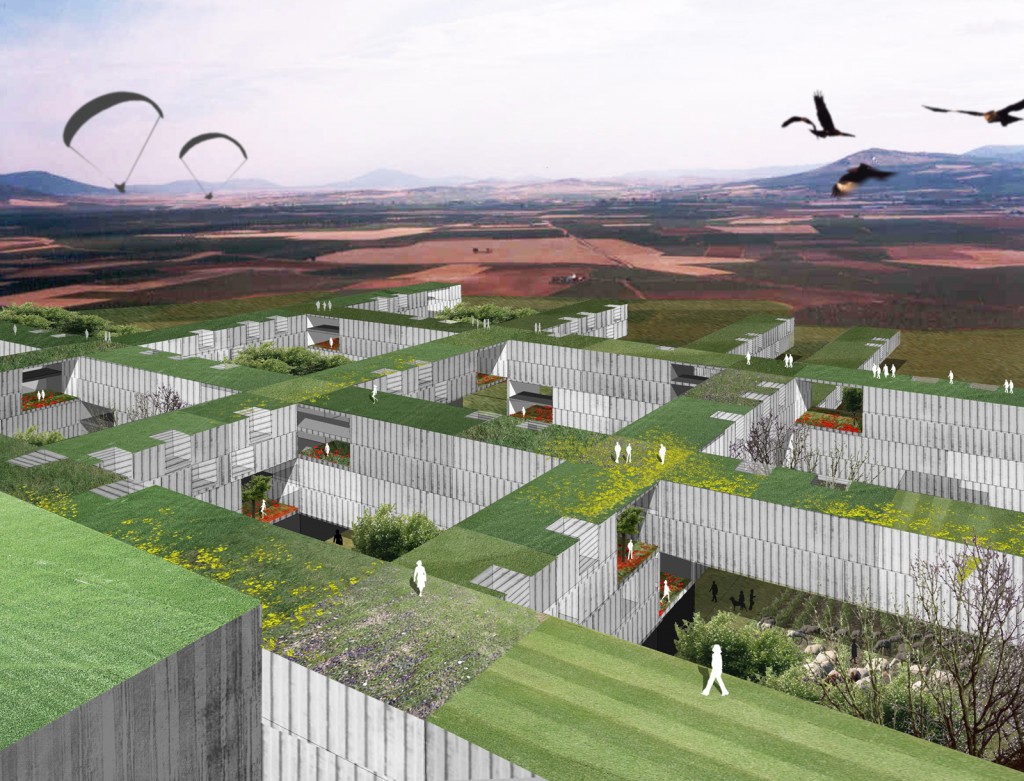 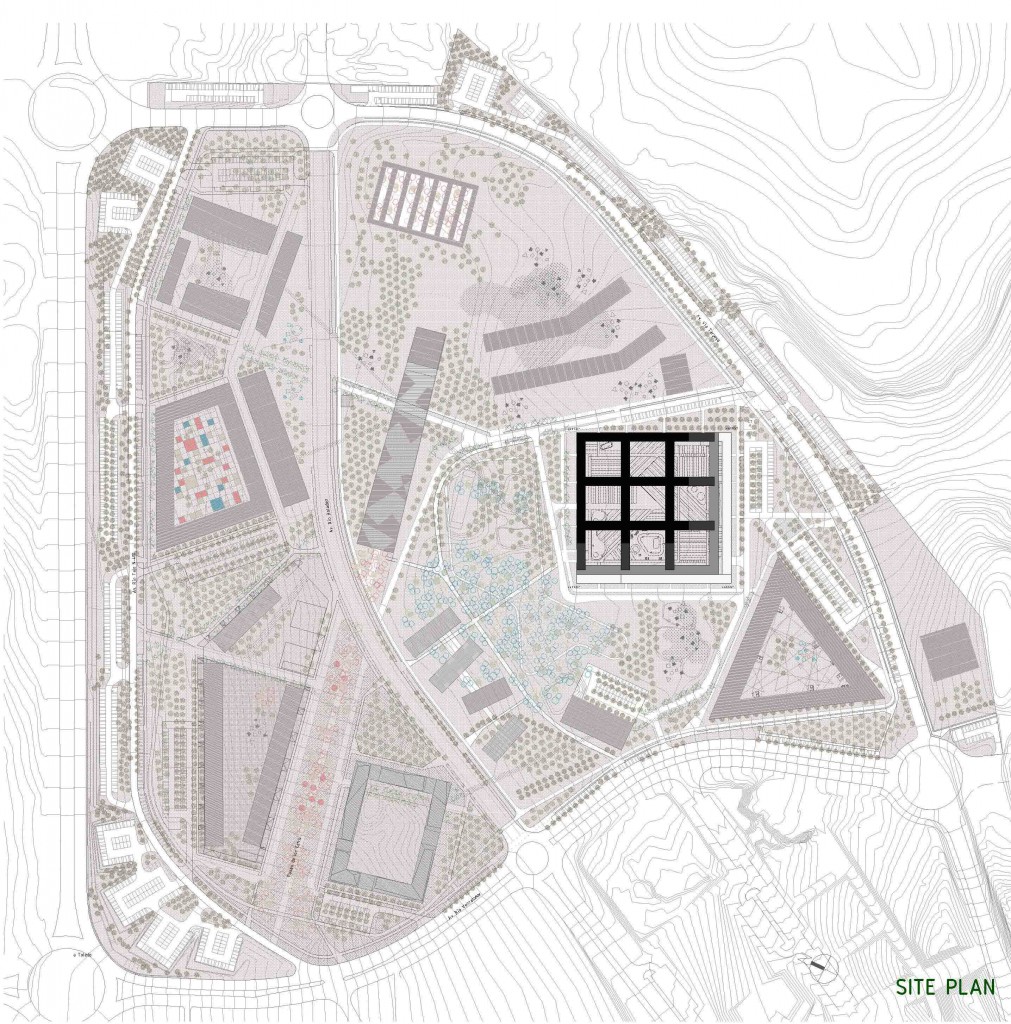 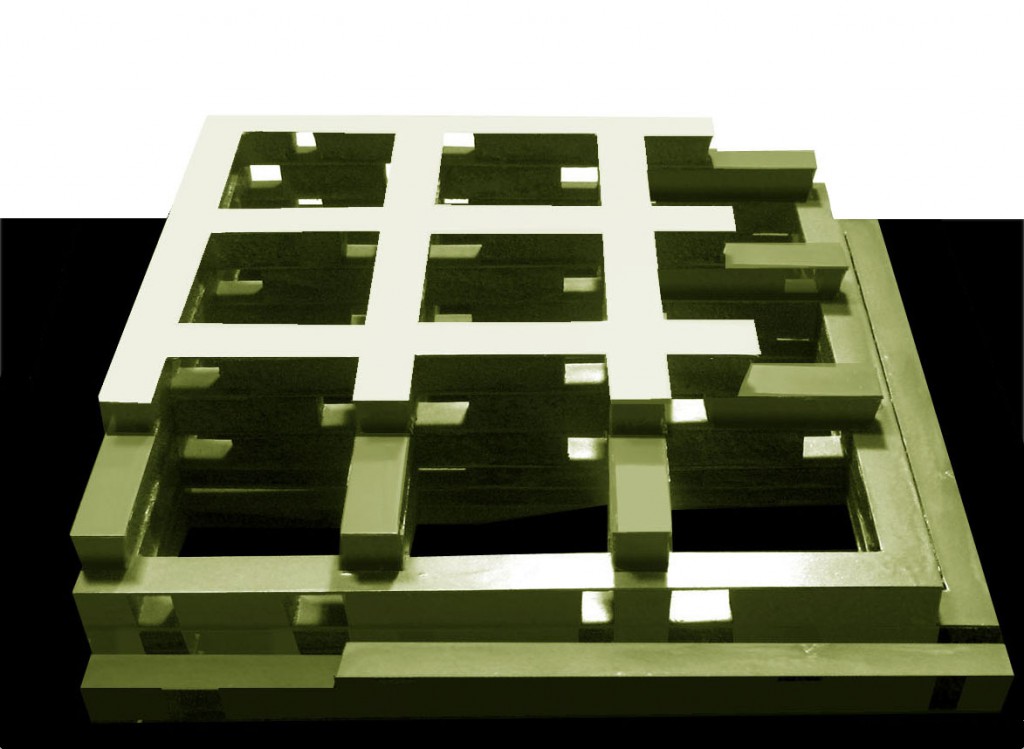 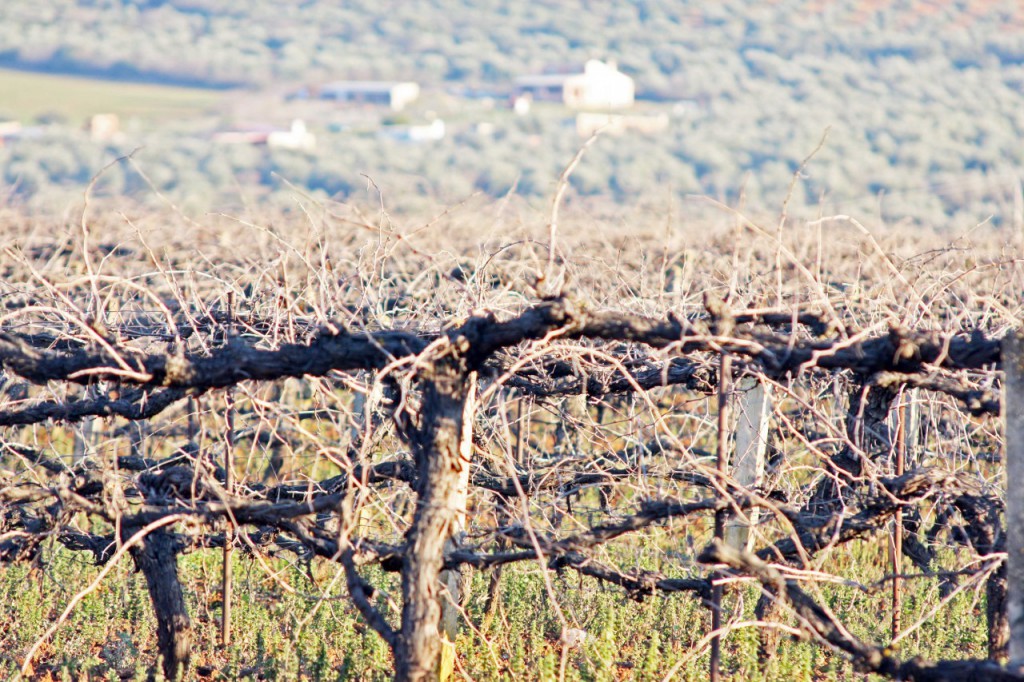 The Advanced District of Toledo is a pioneering government initiative enabling the regeneration of a currently undervalued neighbourhood outside the centre and will create 2,000 state subsidised dwellings and quality facilities.

The urban planning is the work of Jean Nouvel, together with regional and municipal authorities and local residents.

The building plans resulted from an open, anonymous International Ideas Competition judged by a panel made up entirely of architects. A number of meetings and workshops were held, culminating in the creation of a New Housing Office in the area, where the interests of the Government, local council, local residents and design teams have been harmonised.

A flexible urban item is to be created based on a framework of residential-use bars with a 7.5-m-wide bay which will form a series of 30 x 30 m patios linked in both directions via a large porticoed ground floor and a series of façade openings – “high rise patios” – created as voids by the alternating arrangement of housing units on every other floor.

The building is conceived three-dimensionally as an open system, the material nature of which accepts the passage of time to create an artificial-natural structure which adapts to the land while simultaneously conditioning and colonising it, integrating bioclimatic, landscape and architectural elements, akin to a vineyard’s lattice of stakes set into the existing ground. 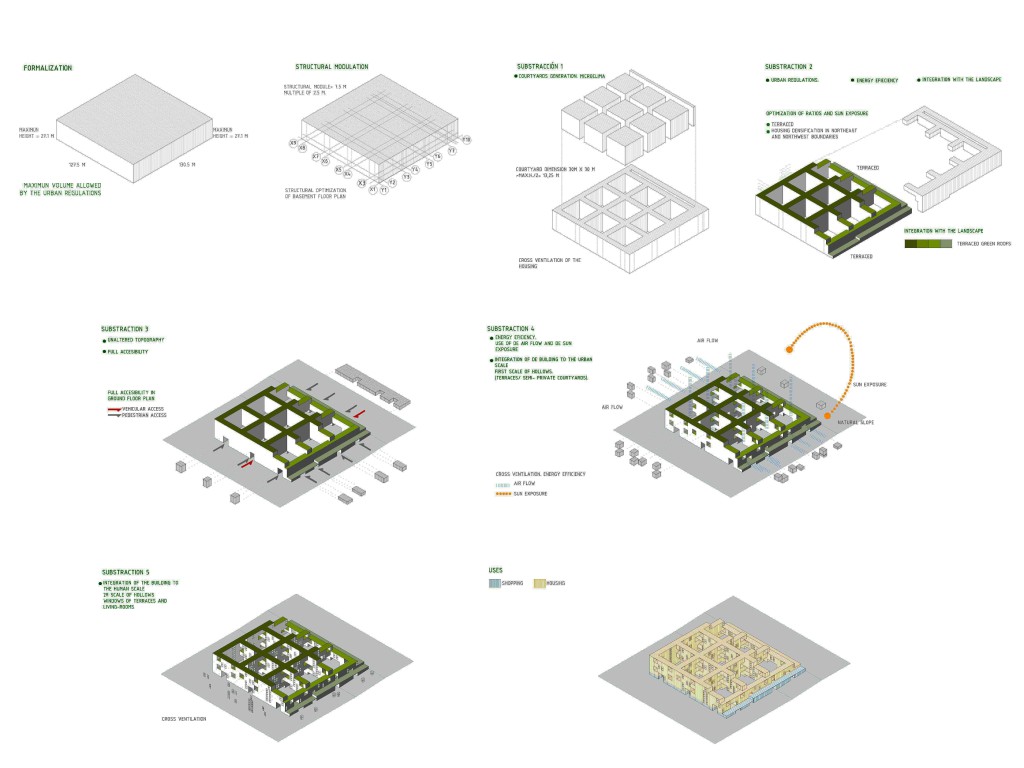 GUIDING CRITERIA IN THE DEVELOPMENT OF THE PROJECT:

I. CRITERIA FOR ENERGY EFFICIENCY IN CONSTRUCTION

By means of good use of passive design, the project takes advantage of the virtues of the materials and the form of the building, without great show, by studied use of its orientation and exploiting thermal inertia. Thus, the building is terraced to optimise the sun falling on the housing, while attempting blend into the neighbouring landscape.

The ground floor is landscaped and is entirely free of dwellings and building, with only the vertical communication shafts which provide access to the internal doorways being supported on unaltered ground, to prevent unnecessary earth movements.

The green space for communal use generated in turn creates a microclimate through the use of evaporative cooling, a rational use of the landscaping (using native, low maintenance species), and its appropriate development (differentiating between plantations in sunny and shaded zones).

To take advantage of the prevailing winds, “patios” are formed within the framework of the housing. These are meeting places for neighbours as well as acting as semi-private intermediate green spaces (which can be used as small urban gardens) and enable wonderful ventilation and sun exposure conditions in each housing unit.

Ecological green roofs with native species are planned to provide excellent acoustic and thermal behaviour and the possibility of storing rainwater to irrigate the garden.

Power cogeneration systems are installed so as to reduce costs and pollution. Microgeneration is a system aimed at making maximum use of the performance of motors which heat water to be used in heating and for sanitary hot water. During this process, the excess energy is converted to electricity which, if not used directly in the building itself, is sold to the electricity companies for immediate use, to avoid the need for further infrastructure to store this excess. 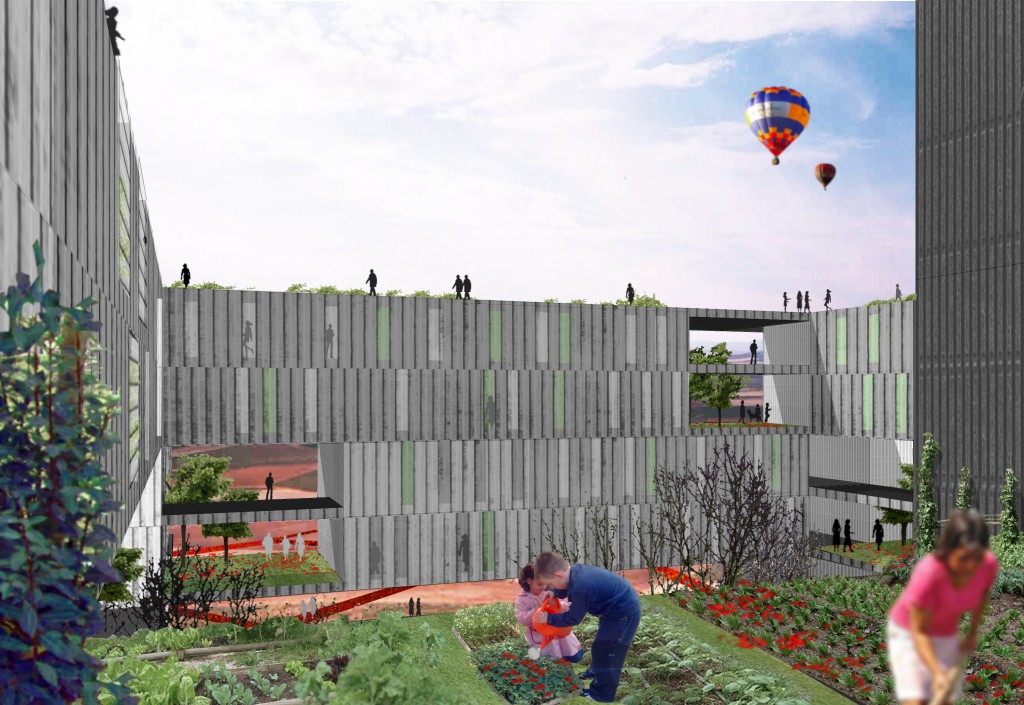 II. CRITERIA FOR OPTIMISATION OF ENVIRONMENTAL AND ECONOMIC COSTS IN THE CONSTRUCTION DEVELOPMENT OF THE BUILDING

Furthermore, the project develops a construction model which minimises energy and economic consumption. It acts on four parameters:

Energy used in the transport of materials: using local materials, thereby reducing the energy employed in their movement and promoting the regional economy.

Energy used in building maintenance: with the use of passive air -conditioning systems in the building (sun, wind, rain), as well as the use of low-maintenance, self-cleaning materials, native vegetation, etc.

III. SUSTAINABILITY CRITERIA EMPLOYED IN THE DEVELOPMENT OF THE TYPE OF HOUSING

The 325 housing units are dual aspect, with cross ventilation and dual façade in a 7.5  m wide bay. They are generated from the same base, on a variable functional strip, made up of a hall, kitchen, bathroom, drying area, living space and terrace on the south and west façades, and another parallel orientated to the north and east where the bedroom area is located, with all the lounges having dual orientation, north-south/east-west and terrace. Due to Toledo’s climate, the terraces are installed in all the south and west faces of the block, to generate shade in the hot summer and to be used as a space added to the lounge in spring and winter.

The housing space is devised in a flexible manner, to be able to be adapted simply to possible changes over time, enabling the accommodation of the differing and changing needs of today’s individual/family unit. As such, the housing is entirely free of internal columns and general installation wells, the structure and installations being carried to the façade with bay widths of 7.5 m. The internal layout is made using “dry” materials, in addition to partitions using moveable elements, which enable the spaces to be adapted easily without the need for building works.

Using this simple outline, housing is generated with very high environmental quality and spatial versatility with 1, 2, 3 and 4 bedrooms, for people with reduced mobility and for large families.

In this manner, the project opts for architecture which takes its references from a place halfway between city and countryside, which draws on pre-existing experience, using local elements and resources and reinterpreting them with rigour and an innovative vocation to incorporate them as cutting edge design tools for the Toledo of the 21st century, with Toledo-style cool, porous patios in the shade, native materials and vegetation, green roofs, etc.