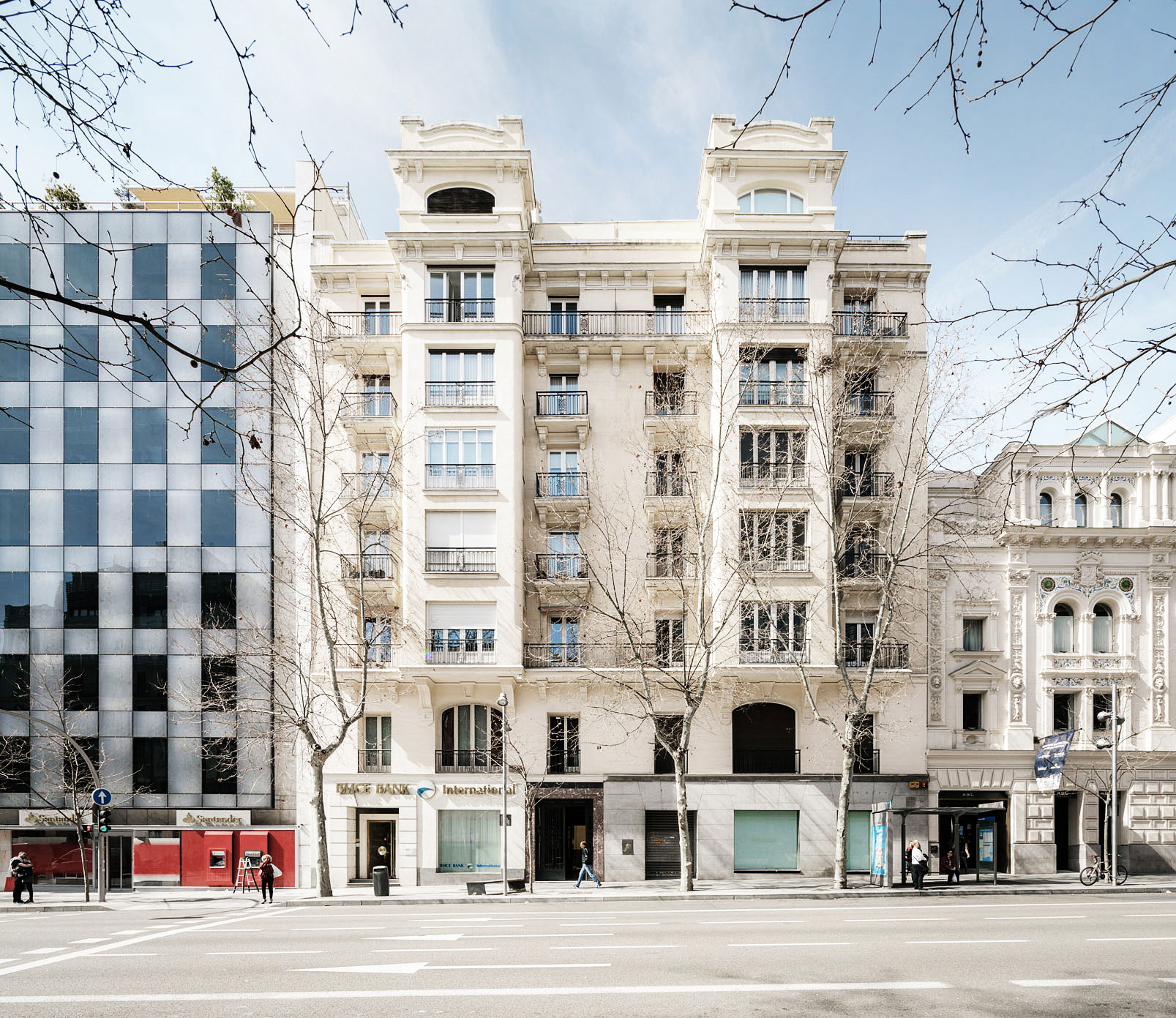 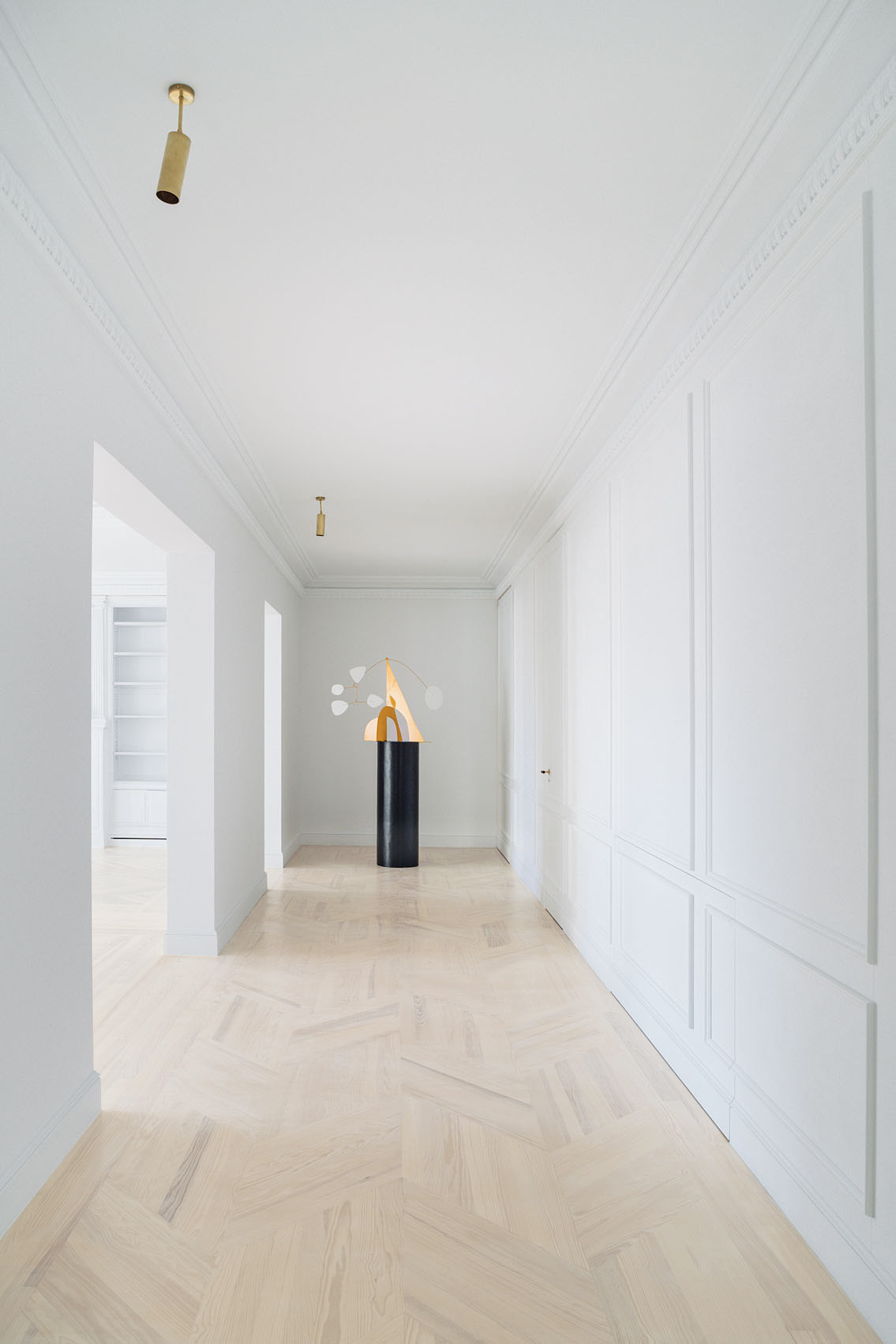 The project looks to adapt an old apartment, in one of the late 19th century stately buildings located on Madrid´s calle Serrano, in the extension to the city designed by Carlos María De Castro, to contemporary family needs

In keeping with the natural structure of the building itself, it was decided to generate two large open spaces at the two extremes of the home to produce the domestic setting for daytime use. Openness dominates, with the removal of partitions and dividing elements, extending the spans of the structural walls, so generating visual fluidity and permeability, as well as the necessary versatility for the users of the home themselves to be able to reformulate spaces simply through furnishings.

The first open space acts as a natural extension to the magnificent glazed entrance hallway to the building, as well as to its imposing main staircase and lift, both of which have heritage protection.

It was designed as a large white open space flooded with light that enters through the large windows that open onto calle Serrano. The use of a uniform style makes it possible to conserve existing elements and to introduce new features that add value to the original space.

As such, a new deep functional wall was designed, ornamented externally with the same arrangement as the existing panelling and acting as a backdrop to this great space as a dynamic element that also unifies the functional programme it completes. The making of openings by way of camouflaged doors emphasises the idea of an old tapestry that conceals within it the parts that complete the apartment’s functional programme. 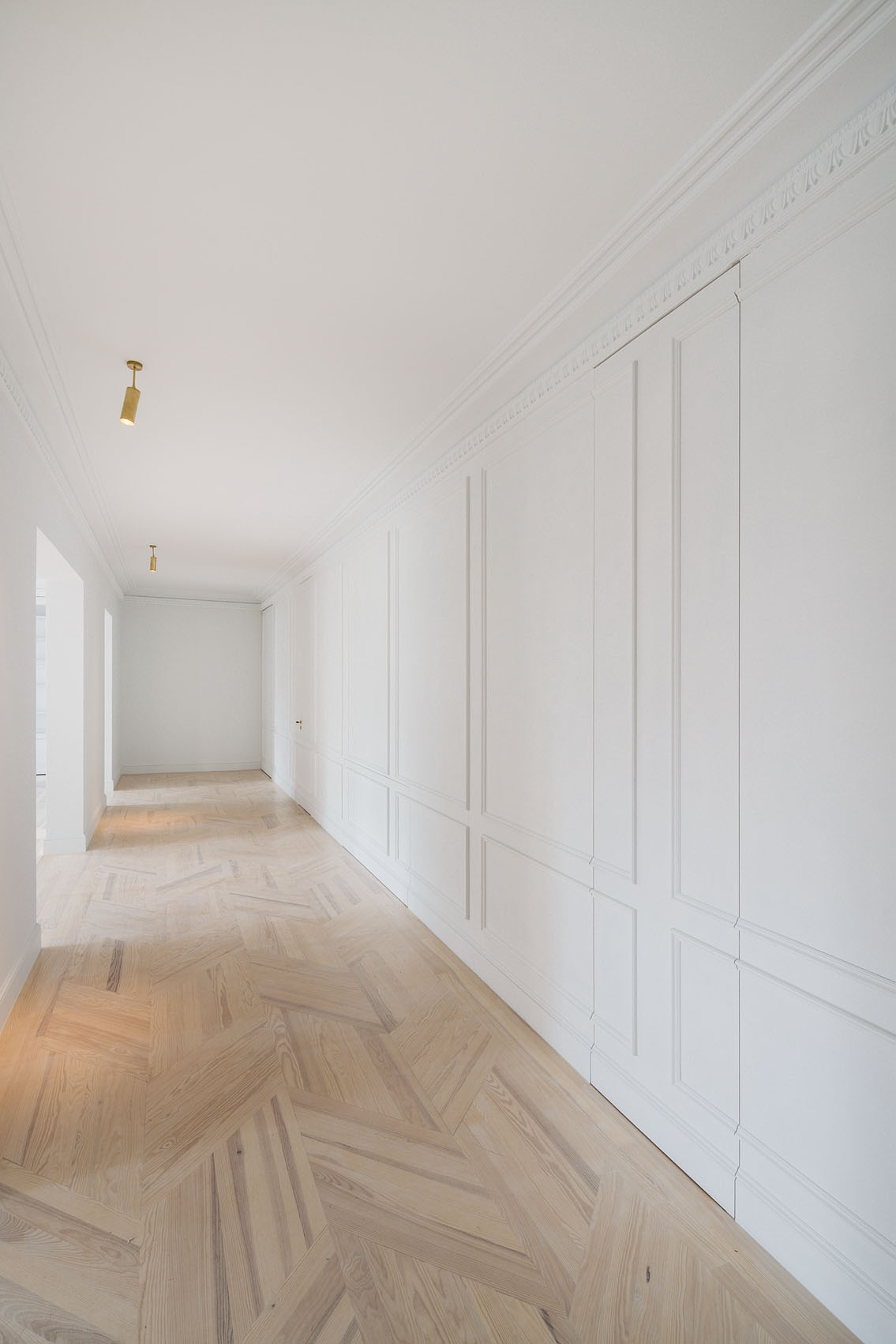 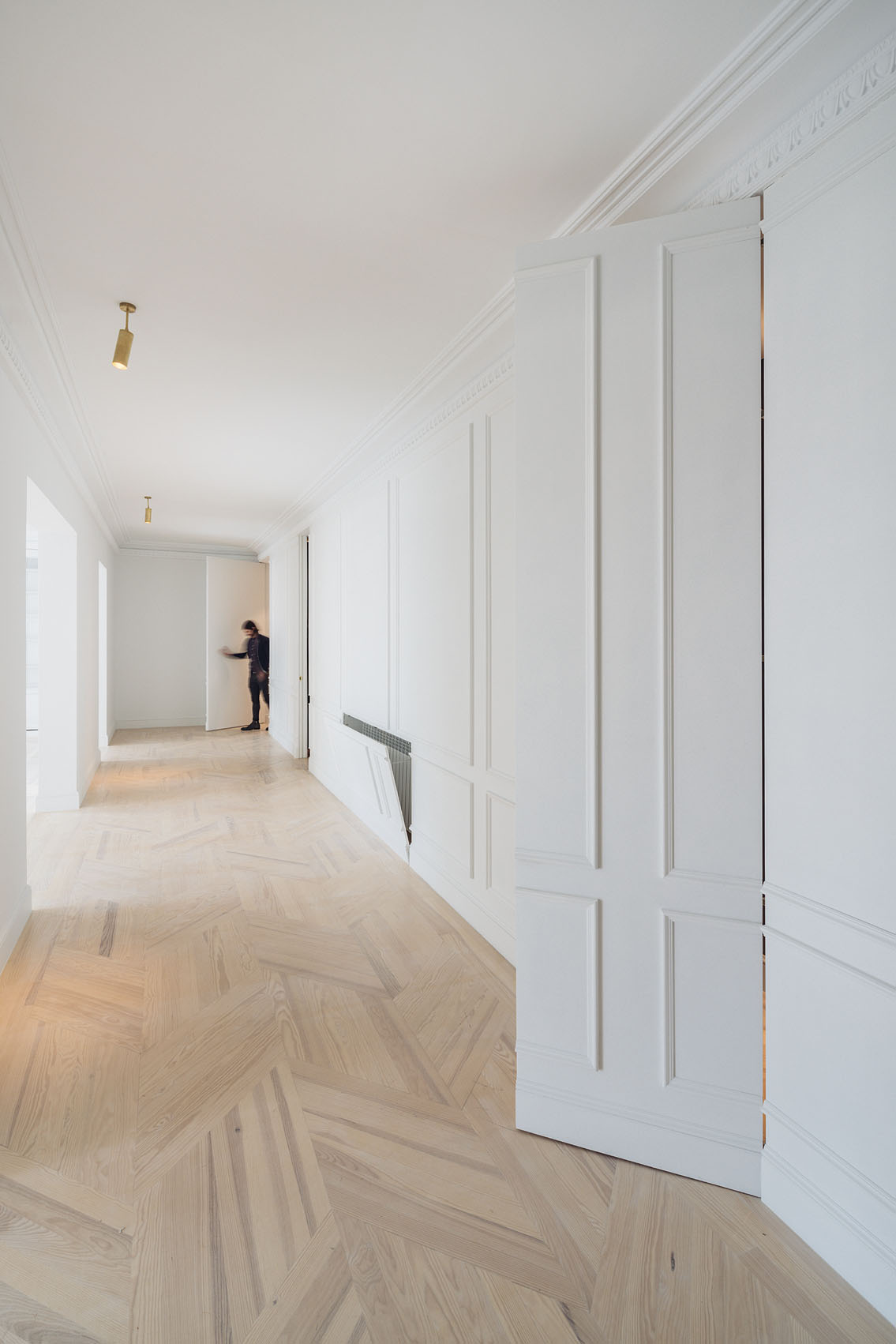 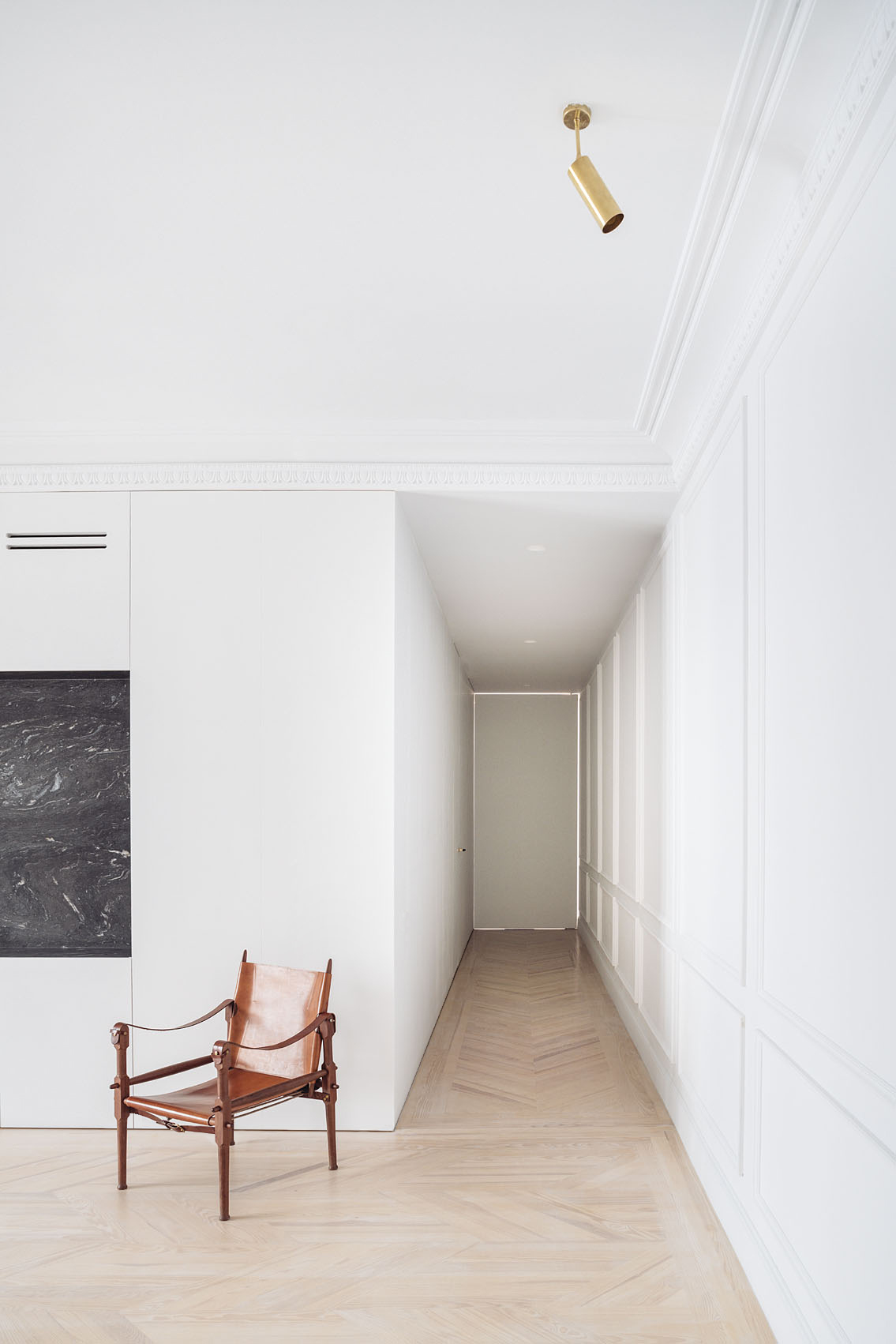 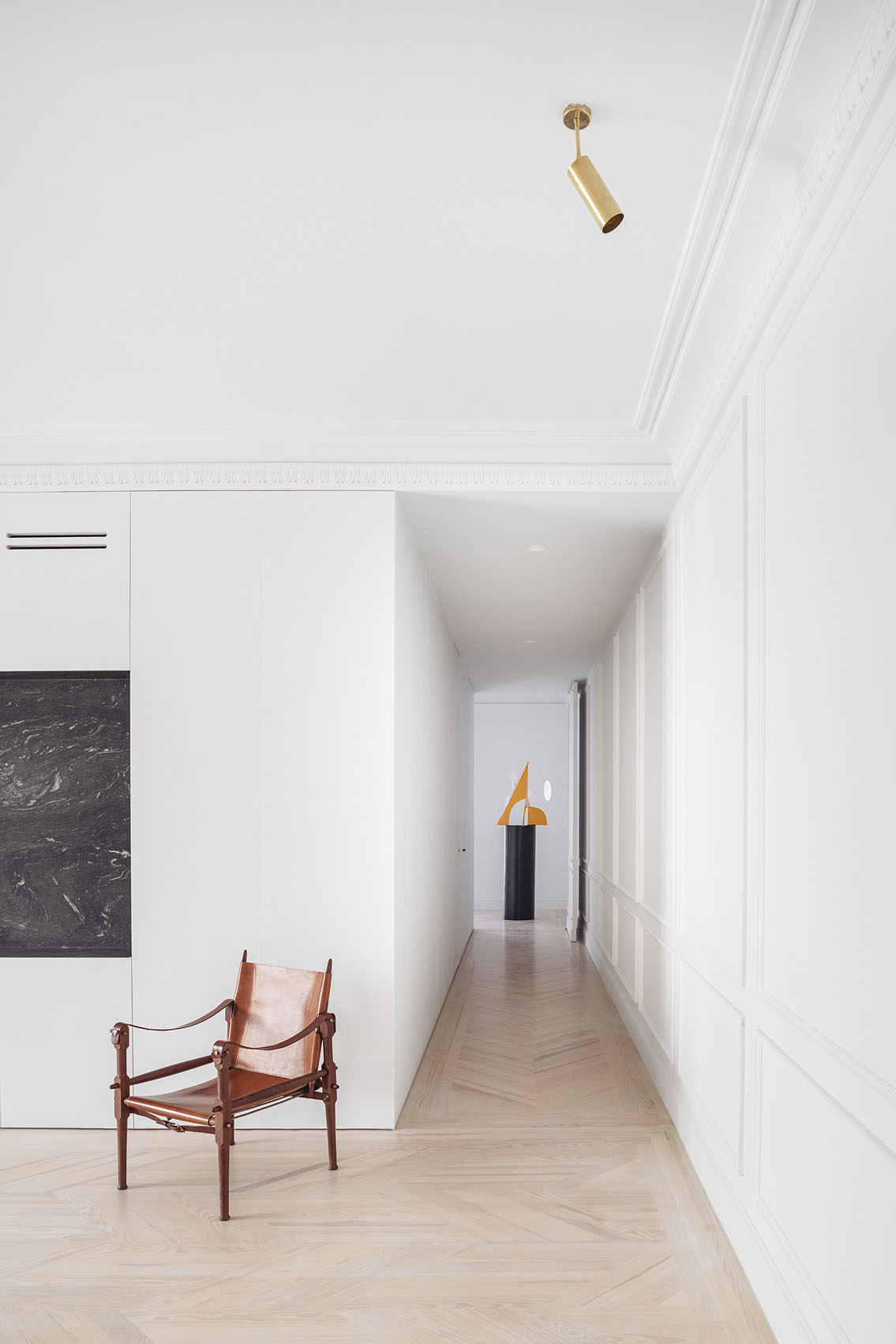 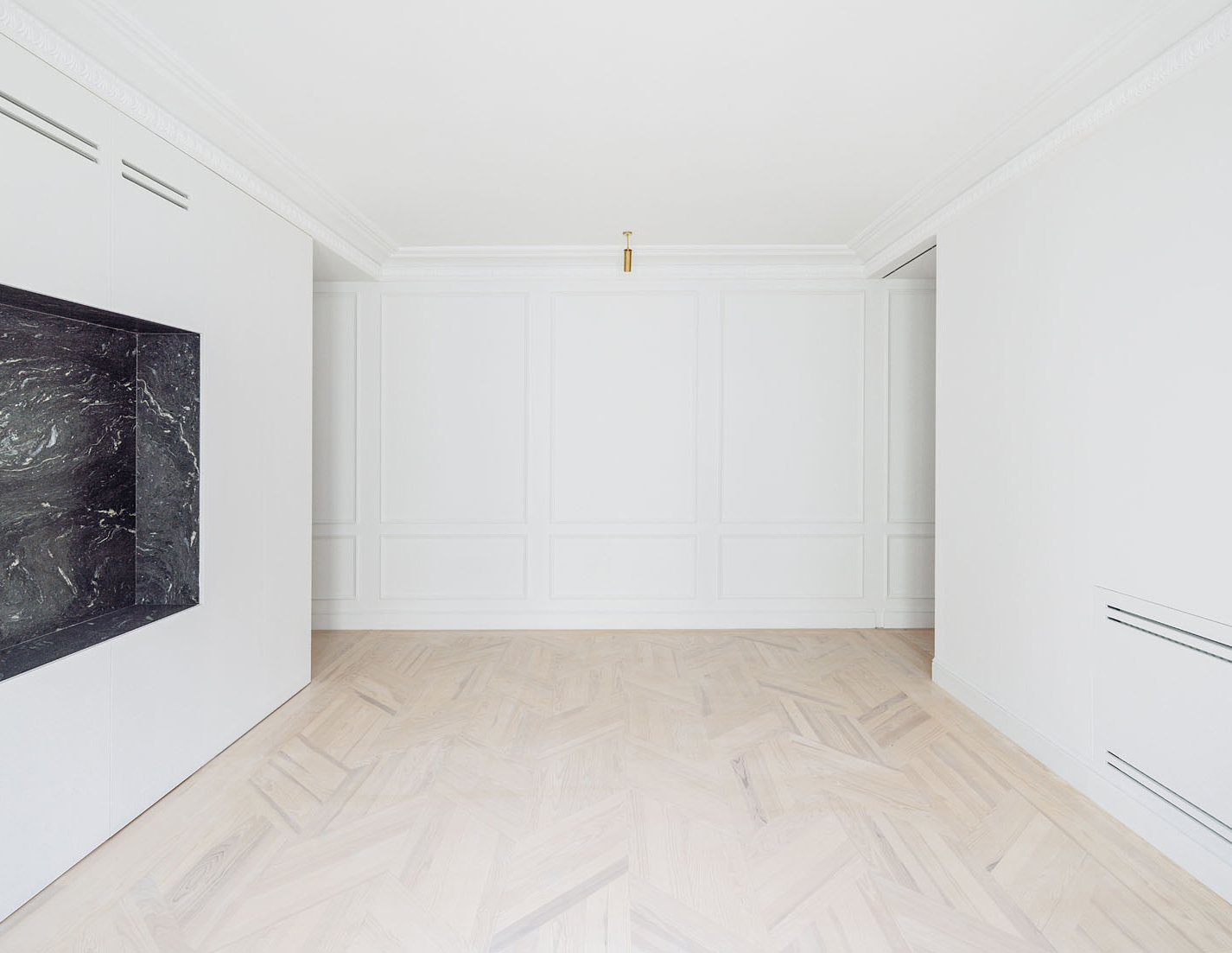 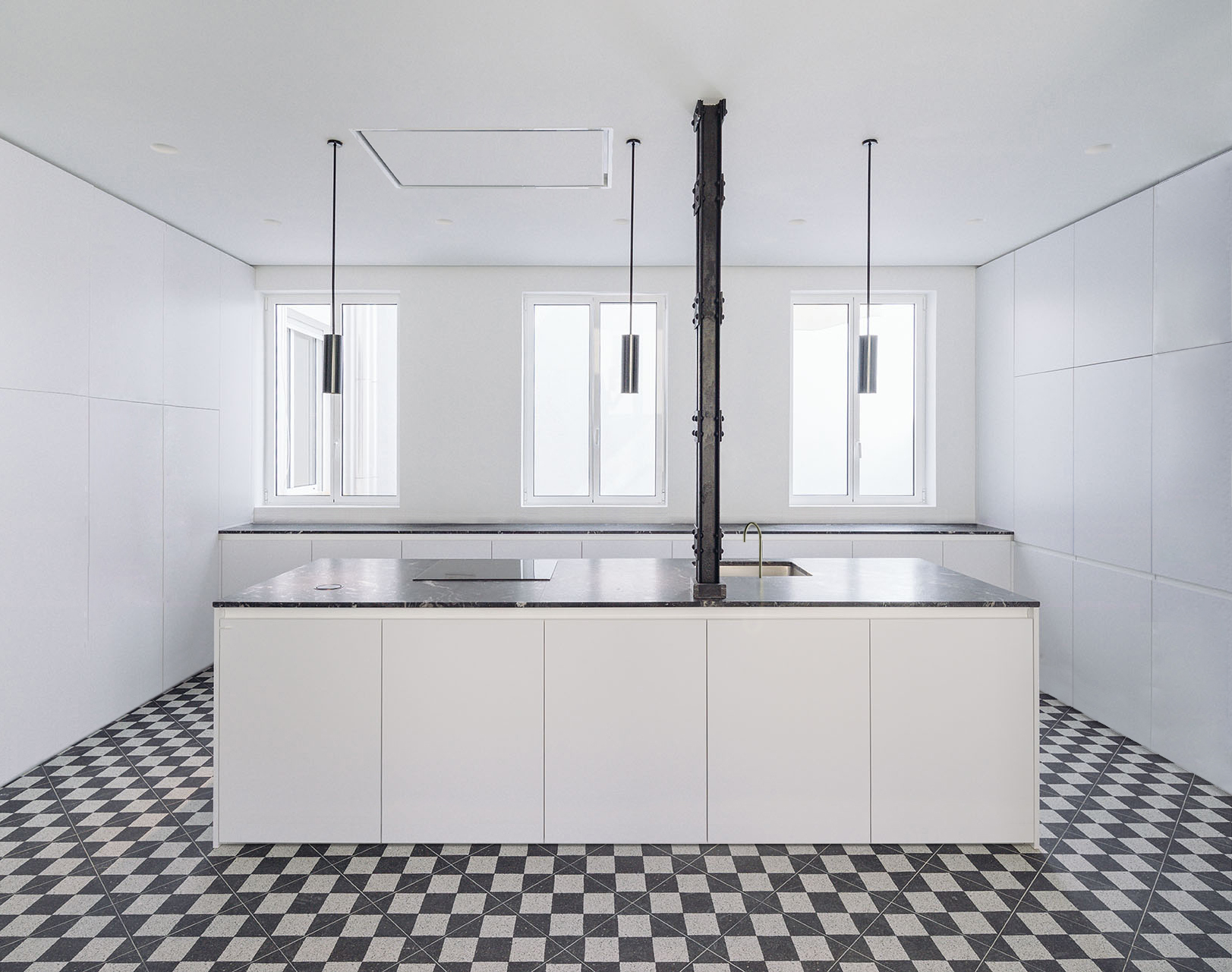 The second large space, linked to the rear staircase, is located between two large patios, tying together the functional axis made up of the kitchen, office and laundry room.

The rest of the functional programme for night-time use is resolved in the space between these two great extremes connected to each other through mobile subdivisions and a great gallery space that opens out at their mid-point, generating a family living space right at the heart of the home.

Opting for a contemporary, large, clean, open space, together with respect for the original building elements, such as the fireplaces, mouldings, libraries, wood panelling, melis pine flooring, windows and iron fittings, generates a new sensitivity that obliges careful design and selection of the rest of the materials for the apartment. The elaborate laying of the floors, the purposeful design of the pieces of furniture and lighting, incorporating fine materials such as stone and brass, complete the intervention and succeed in creating a new atmosphere of a contemporary home that respects the original character of the late 19th century stately building in which it is located. 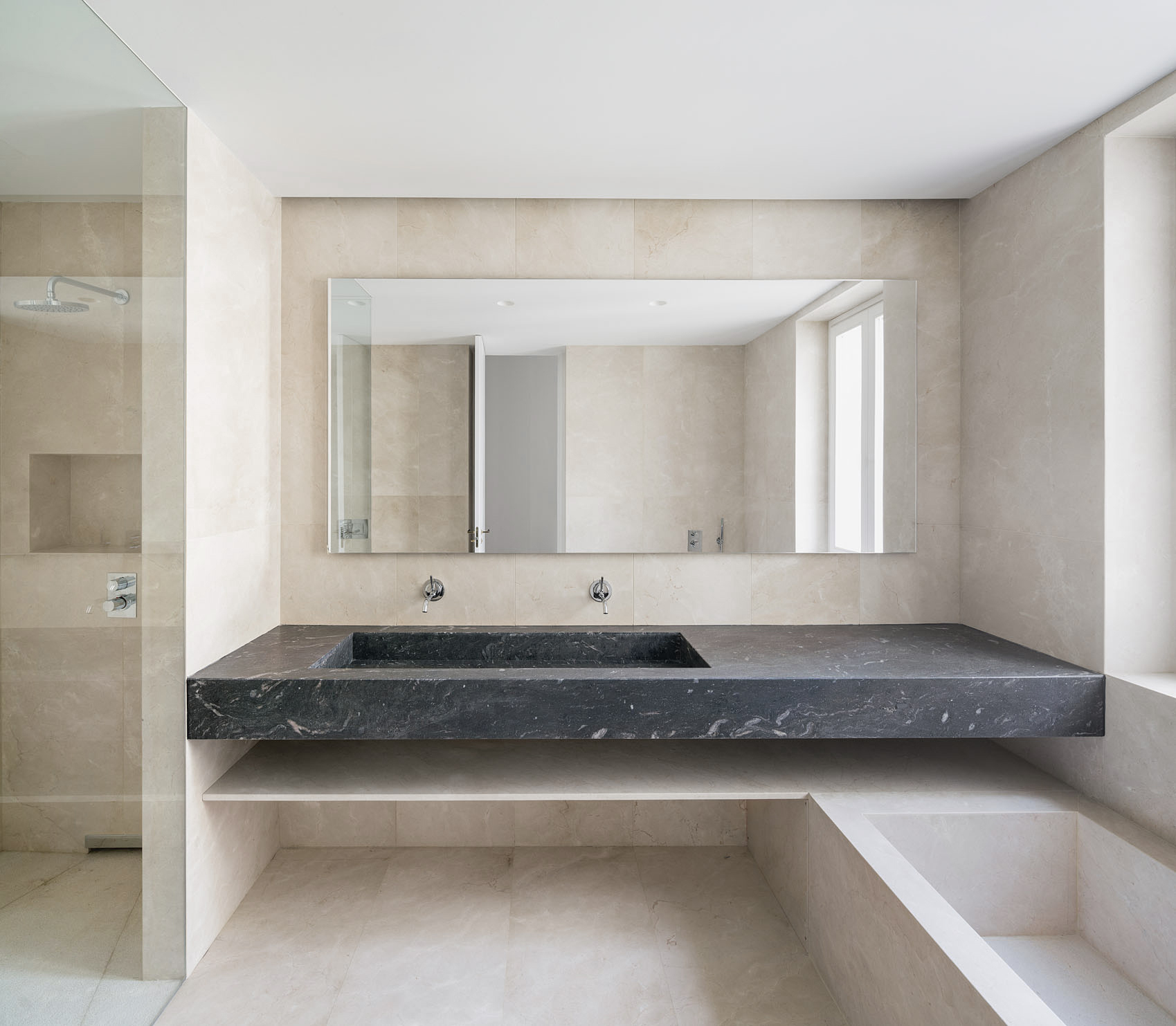 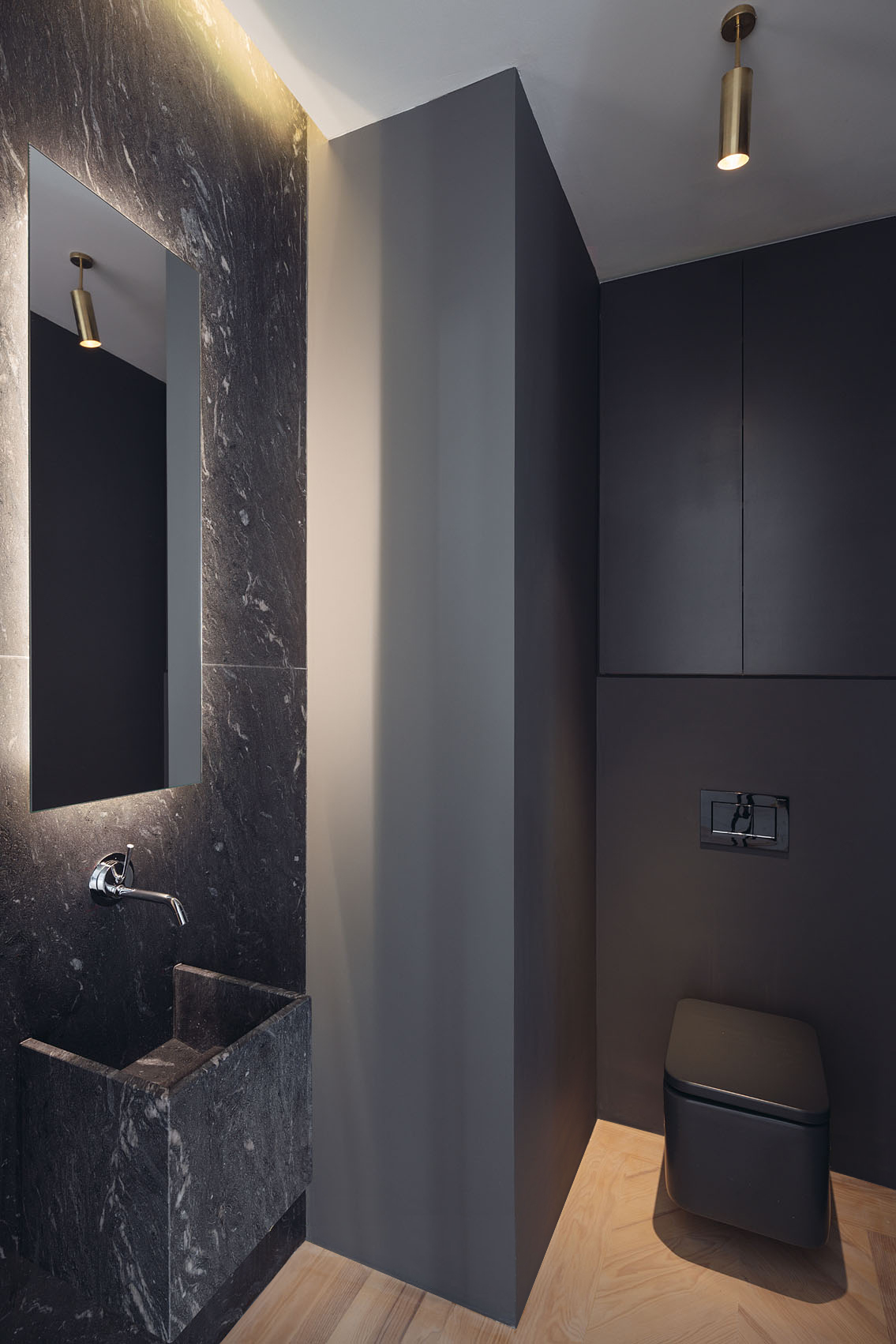 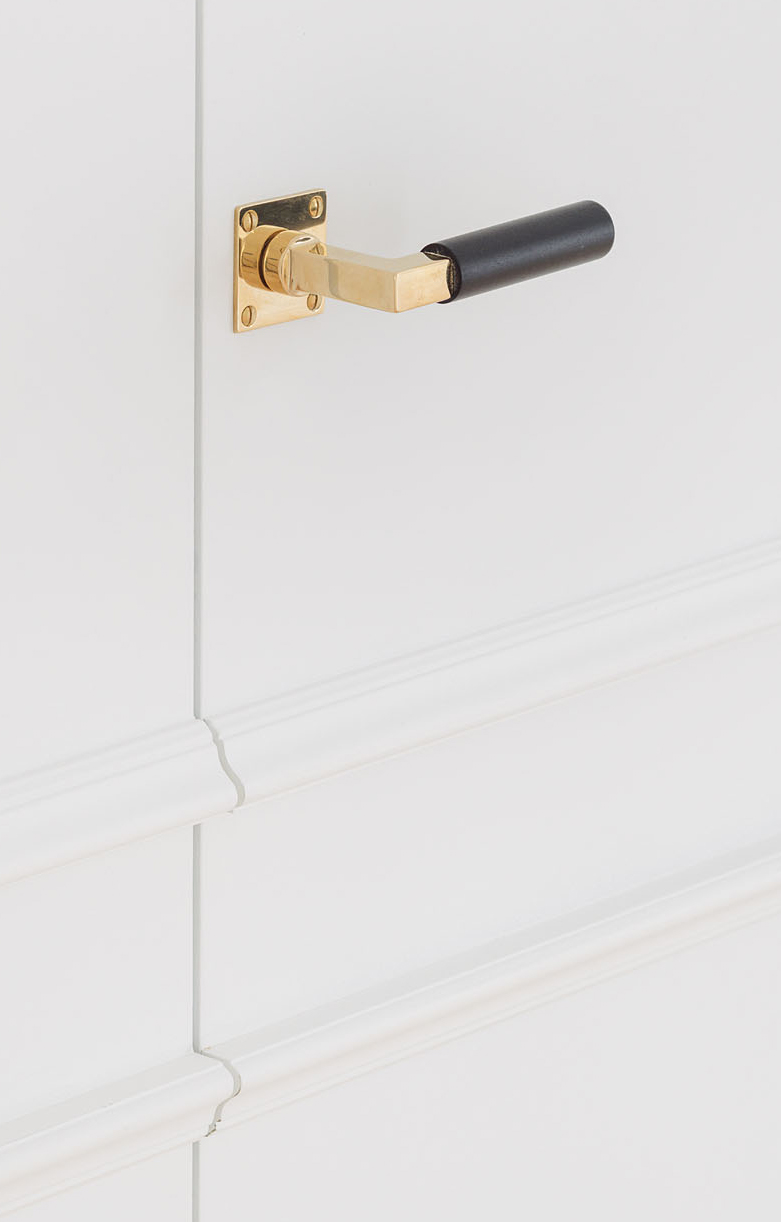 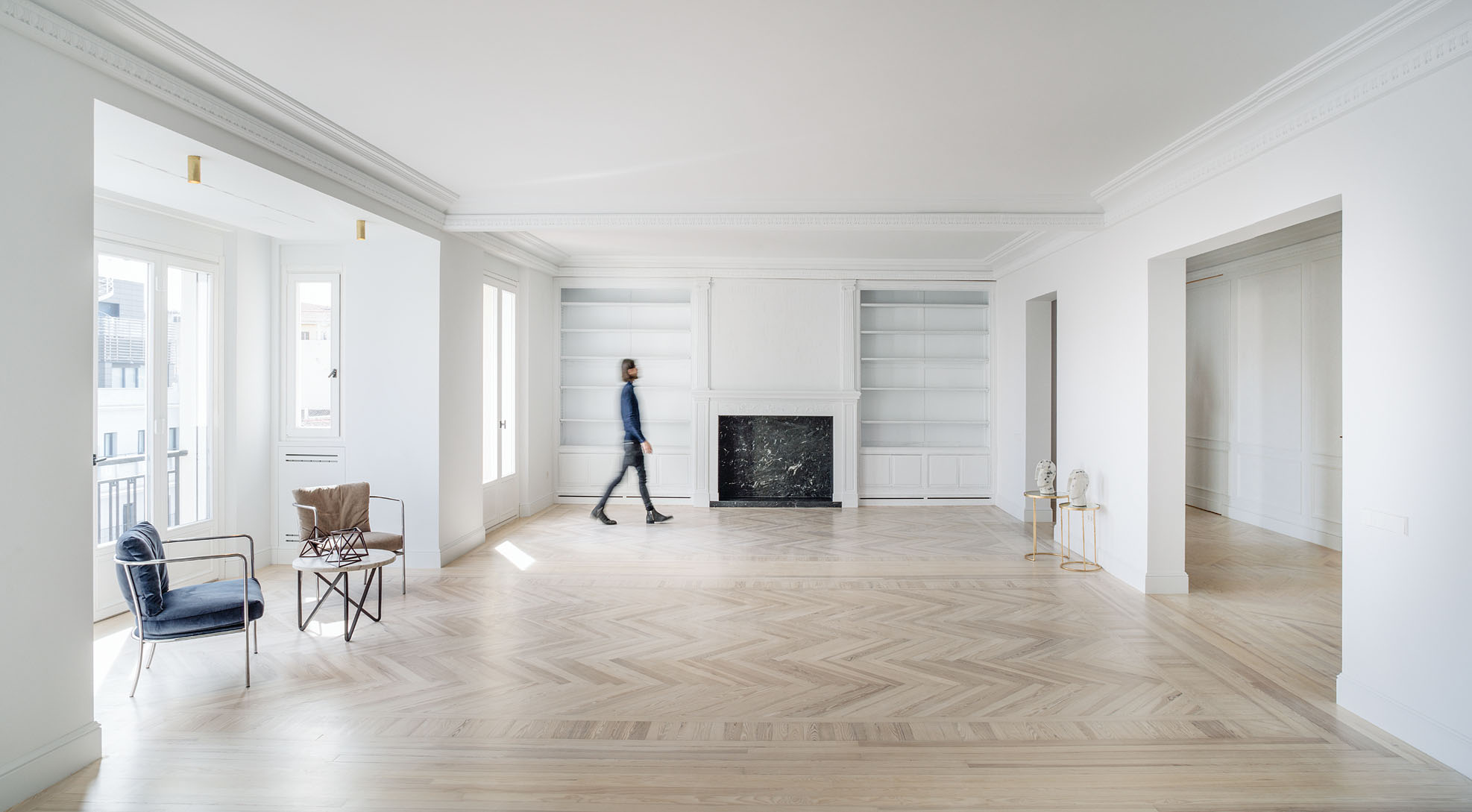